Welcome to the website of the police shootingteam, unit Noord Holland

The police shooting team exists of a team of politieofficers who are in possesion of a duty firearm and are participating in several shooting contests. Most of these contests are those who are counting for the annual competition "European Police Course".

Participating in these competition are members of the armed forces e.g. Customs, Justice Dept., military units and the Royal Dutch Military police from the Netherlands, Belgium and Germany (others are welcome to participate !). We are shooting on individual basis and team effort.

But what is the European Police Course (in dutch: Europees Politie Parcours)...???

It's a competion shot within a maximum time of 5.30 minutes, with a duty firearm with 2 magazines and 50 rounds of ammunition. The distances vary from 7 m. to 30 m. and are shot on a special target.

The start begins at the 7 line with two magazines filled with 5 rounds each, and one magazine loaded in the weapon. Within 15 seconds you need to shoot the 10 rounds at the target including a magazine change.

After this stage you need to go to the 30 m line and shoot 5 rounds in laying position. After that, 5 rounds sitting on the 20 m line. Then 10 rounds from behind a barricade (5 shots strong hand / 5 shots weak hand). After the barricade 5 shots shooting on the knees followed by 5 shots within 10 seconds. After the 40 rounds on the maintarget, the last 10 rouds must be shot on the two target at te left- and right upper corner. This can be done in the remaining time (5 shots single hand, singelaction and 5 shots with both hands, single action).

The time will be stopped when the weapon is reloaded en put into the holster after every stage. If you drop your ammunition, it's lost...  Shooting after the timesignal has been given is rewarded with a penalty of 5 points.

If you have any questions about this type of contest or you are intrested in participating, send us a email on webmaster@politieparcours.eu 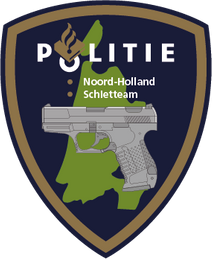